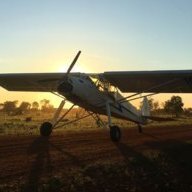 A lot of misinformation here , firstly , there hasn't been a case of a Skyfox shedding a wing , ever !   There has been a couple of break ups , one was an aircraft that was left outside in a tropical