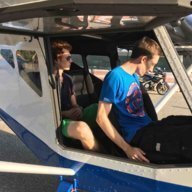 Rmorton, I have a suggestion for you before you start moving holes at such a critical location:   Take an accurate pattern of the holes from the steel part: to do this you will need stiff pa

Rmorton, my experience of the Savannah build was that 99.99% of it went together as per the manual and diagrams, and for the other 0.01% I never reached for the drill: when you open holes with a drill

I am using Cortec VpCI-373, a corrosion inhibitor that is recommended by Zenith.  VpCI-373 is frequently used by North American aluminium aircraft builders. So far, I have found it easy to apply with