Why I went Ultralight after starting GA...in case anyone is interested... 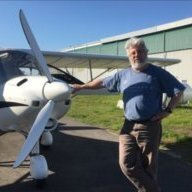