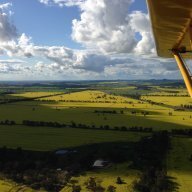 Hopefully you’re learning a lot of prevention skills? The technical term for UA training now is Upset Prevention and Recovery Training (UPRT). The most common upset killers are generally non-recoverab

I was at a UPRT Providers Conference sponsored by CASA and aircraft insurance companies last month. My presentation included some comments on the "cesspit of misinformation, half-baked truths and miss