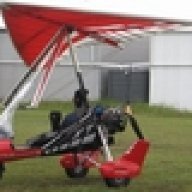 By Tracktop,
August 25, 2009 in Trikes and Microlight Aircraft Usergroup