A pilot has had a lucky escape after his light plane crashed in western Queensland. 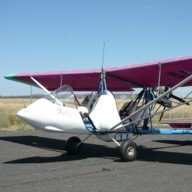