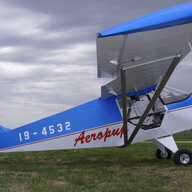 SorryJacko, many of us are to old and tired to put up much fight any more. Understand that we have been trying to carry the torch since the 60's when we marched through the streets of Sydney in the Mo

You could buy a used single seat thruster, 1/4 of the cost, its Australian, tail dragger, easy to repair with all straight tubes, sails made locally by Wingtech.

Apart from the electric one, interesting yes, but the traditionally powered Aerolite 103 seems a very nice ultralite to me. I really like the yoke control wheel and the proportions of the aircraft loo